For a detailed overview of the available elements including an example, see Elements for ERD modeling.

Separate submodels within the model

Within an entity-relationship model, Crows Foot views and NIAM views can be modeled next to each other, but they are considered separate submodels. It means that elements modeled in a Crows Foot view cannot be used in a NIAM view, and reverse.

The entities in both types of views also have different colors. In the model browser, the elements of both submodels are located in separate containers called "Crows Foot model" and "NIAM model", as is shown in the following figure. 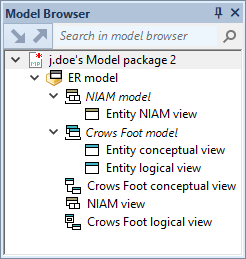 It is possible to use elements in multiple views of the same type, so in various Crows Foot views, or in various NIAM views.

The entities and attributes in an ER logical view and NIAM view have controls that can be used to characterize and mark them or provide them with specific information. The conceptual view does not have any ERD-specific controls. Some of the controls appear when you click an entity or attribute, and some are always visible. Example: 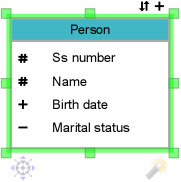 Example of object controls on an entity

Click the control to perform the operation. For an overview of the available controls, see Controls for the ERD objects.