Attributes and keys in an entity-relationship model

Attributes can be used in the Crows Foot logical view and in the NIAM view. With attributes, you can define the properties of an entity. Basically, each entity must have a minimal set of uniquely identifying attributes unless it is a weak entity. Together, these attributes form the primary key of the entity. For each attribute, you can specify whether it is part of the primary key, and set the optionality.

Keys can be used in the Crows Foot logical view. A key is used for uniquely identifying an entity and can be linked to attributes in an entity. A key consists of one or more attributes. When a single key is linked to an entity, it is the primary key. The primary key may be used in other entities to refer back to. To refer from one entity to the primary key of another entity, you can set a foreign key. That way, you can define the relationship between different entities.

In a NIAM view, an entity can be uniquely identified by using uniqueness constraints.

Good primary keys have different characteristics. Firstly, they are unique for each instance of an entity. Secondly, they are never empty or zero: they always contain a value. Thirdly, they rarely, preferably never, change.

Adding attributes to an entity

Attributes can be added to an entity in different ways:

Attributes cannot be added by first creating them in the model browser, and then dragging them onto a view. However, when created in a view, they can be dragged from the model browser onto another view to use there.

Within each marking type, the name sorting order is used, so the primary keys are sorted, then the mandatory attributes, and finally the optional attributes.

In the NIAM view the attributes are sorted in the order they are added to the entity, and they are also not sorted on their marking. If they need to be sorted otherwise, you need to manually move them within the entity.

You can easily move the individual attributes to put them in the right position on the list. To move an attribute, do as follows:

In the Sorting order window, select the desired sorting order, and click OK.

Removing an attribute can be done in two ways:

In both situations, the attribute is removed from the model (as opposed to what is a common behavior in most of the other modeling languages when removing elements from a view). 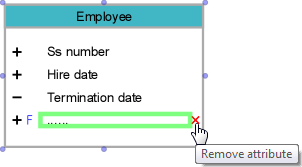 Removing attributes from an entity

There are two ways of using keys in your entity-relationship model:

Making an attribute part of the primary key

To make an attribute part of the primary key, follow these steps:

Modeling a key as an object

To model a key as an object, just add it to the view as any other object. After that, connect the key to the attributes in an entity you want to make part of this key using a Link relation. 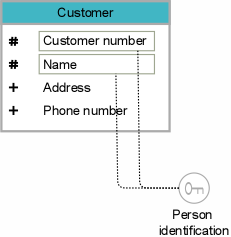 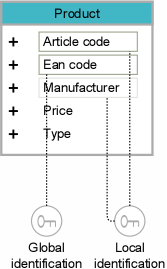 If you add an existing key to another view, and this view already contains the attributes that have been linked to the key, then the links are automatically added too.

in front of the attribute's name.

In case you connect more than one key to attributes in an entity, the attributes will not be marked as part of the primary key because there is no primary key.

If the (primary) key the attribute is linked to, has been modeled as an object in your model, then the attribute also has a light gray border to indicate the connection. This also applies to attributes in a NIAM view when they are linked to a uniqueness constraint. The key does not necessarily have to be present in the same view as the attribute.

Attributes attached to a primary key modeled as an object

Setting the foreign key for an attribute

If you want to refer from one entity to the primary key of another entity in a Crows Foot logical view, then set a foreign key. When an entity has a foreign key, it is indicated by the letter

in front of the attribute name.

Foreign keys in an entity

, the entity with the attribute or attributes referenced, is highlighted in the open view.

as well as a

in front of its name, as can be seen in the above figure.

To remove a foreign key, do as follows:

Setting the optionality of an attribute

]The optionality can be set for attributes in the Crows Foot logical view as well as the NIAM view.

When adding a new attribute, it is mandatory by default. To make an attribute optional, click the

in front of the attribute. In the NIAM view, it directly turns into a

to indicate it is optional. In the Crows Foot view, click the

to make the attribute optional.

To make an optional attribute mandatory again, click again until the