Underneath, an example is shown of a color view, in which for each business service is presented which application services are involved: 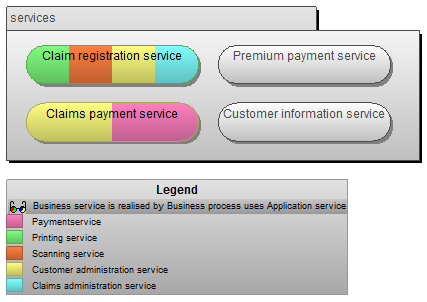 You specify the color view legend with the header statement

Note that you can easily assemble one string out of several (sub) strings. The translate function is described at the Miscellaneous functions.

The color view (and label view) interprets the data written to output (by means of the output statements) in the following way:

Each line exists out of minimally two elements; the first element within the row has to be an object, the other elements are the values that need to be presented for this object as a color.

result in that on object(s) bp1 the colors of ac1 and ac2 are projected. These two output statements have the same effect as:

The color view (and label view) allows several subqueries. When activated, for each subquery a separate sub-legend is created.

For each subquery you create a separate script (tab), containing

It is possible to specify which colors to use in the color view. In some applications a specific color causes specific associations to people, and within your script you would like to use (or not use) these associations. The colors red and green are examples with strong associations: red is associated with "stop, negative, not" and green with "continue, positive, indeed". Orange is associated with something in-between.

You could use these colors to indicate that some business processes are phased out or introduced: