The release notes show the latest new features and enhancements in the Bizzdesign Horizzon platform, and the issues that have been fixed.

For each new release, you need to migrate your model packages with metamodels embedded (.xmam), or stored in your personal storage or on the Horizzon Server to materialize the changes and fixes in the release.

If you already run the database on PostgreSQL but on a version before Postgres 14, you must upgrade to PostgreSQL 14, otherwise the server will not start.

If you have a PostgreSQL version newer than 14, and want to continue using it, you must allow the use of this newer version via the configuration file. But please be aware that 14 is the only officially supported version. For more information and instructions, please refer to Bizzdesign Horizzon release-specific required actions , Releases 2022, 3 November 2022 release.

Bizzdesign no longer supports Windows 8.1 as environment for local Enterprise Studio installations. With this, Bizzdesign is following the Windows  lifecycle policy.

The ArchiMate metamodel has been updated to version 3.2 of the ArchiMate Specification. The main changes are:

Data block fields (of all available types) and their values are now available in the standard indexes in OpenSearch. When creating an index pattern for dashboards, the data block fields can be recognized by the prefix datablocks.<namespace>:. 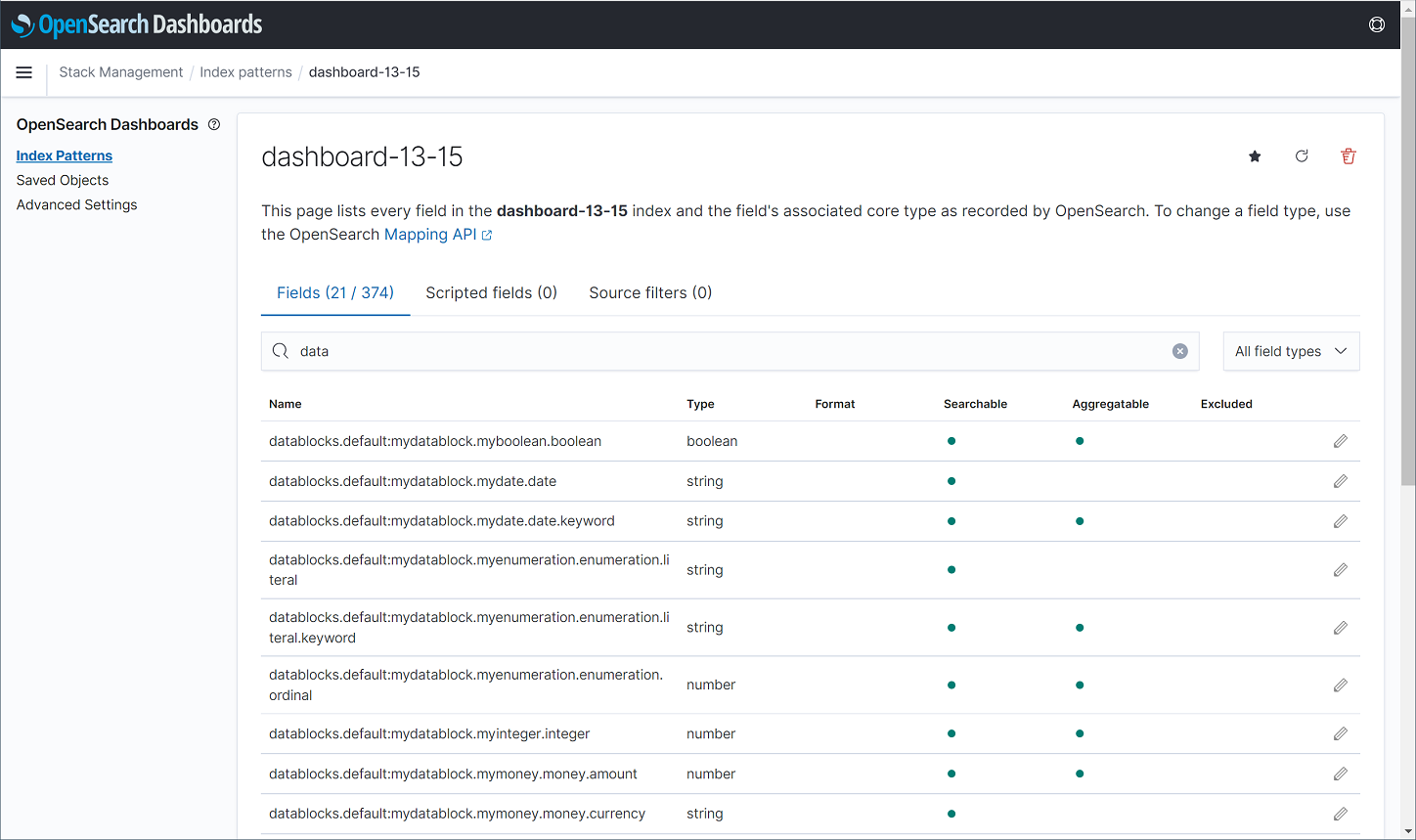 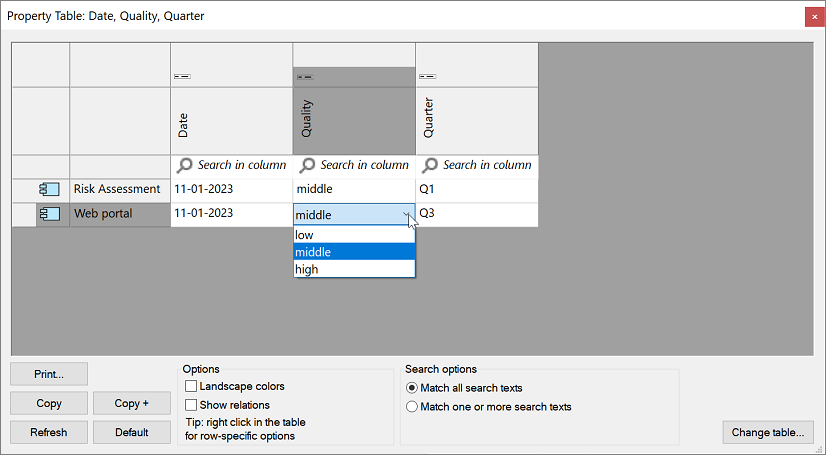 If you would like to have the edit functionality activated for your environment, please contact Bizzdesign Support.

Few styling changes have been made to Horizzon, including a number of updated icons in the Horizzon sidebar and icons for user manage permissions in packages.

A published BPMN diagram now displays a thumbnail showing the diagram's contents instead of a general image. The thumbnail is available in the Properties slide panel of the object and also on the object's inspect page. Also, a BPMN diagram can no longer be set as a favorite, since this can already be done for the object it belongs to. Example:

It is now possible to move elements aside to make room for new elements or add space to the diagram. It can also be used to create space within an element. This function is similar to the Make room function in Enterprise Studio.

To use the function, right-click on a space (or on an element) in the modeling canvas and drag toward the direction where you want to create space. Any elements positioned next to where you start dragging will be moved aside into the dragging direction. Example: 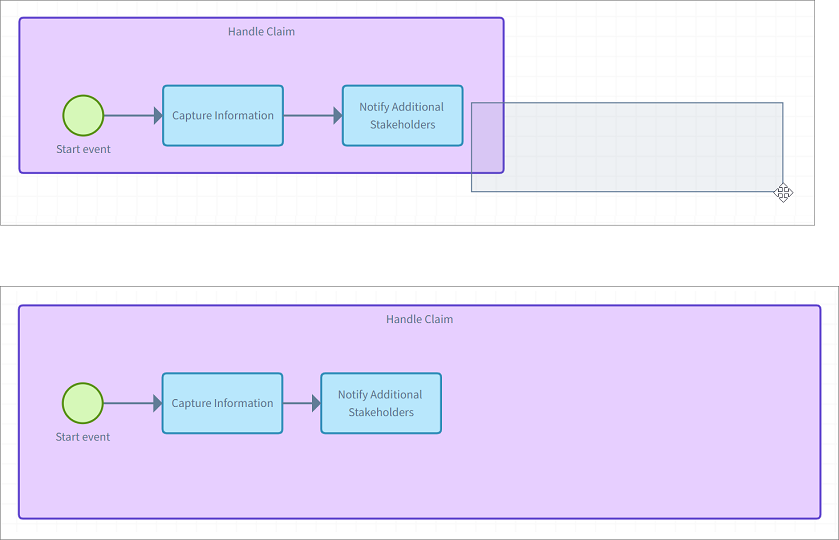 Elements in the BPMN diagram can be selected by dragging a rectangle around them using the mouse. For an element to be included in the selection area, it now needs to be fully contained by it. Partially contained elements are not included. To select elements within another element using a selection area, hold down Shift and drag a rectangle around them. After selecting the elements, they can easily be moved together by dragging the group. 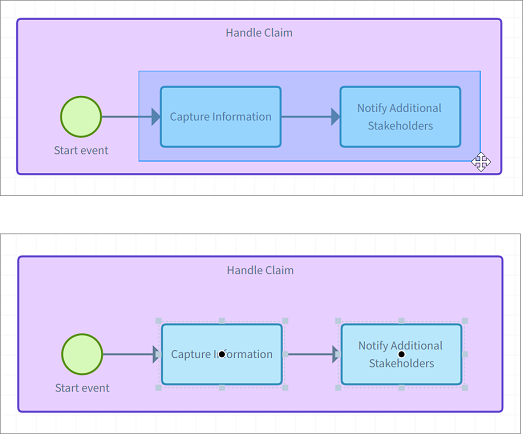 It is now possible to select a specific set of elements in the diagram. Select one element and then press Ctrl+E. All other elements of the same type will also be selected. This function is similar to the Select similar  function in Enterprise Studio.

. The direction(s) that can be set depends on the used data type (Data input, Data output, or Data object). Also, the positioning of elements connected with a data association has improved.

Connecting a message flow to a pool has been made easier. Drag the flow to the first border of the pool until it turns green and release the mouse button. 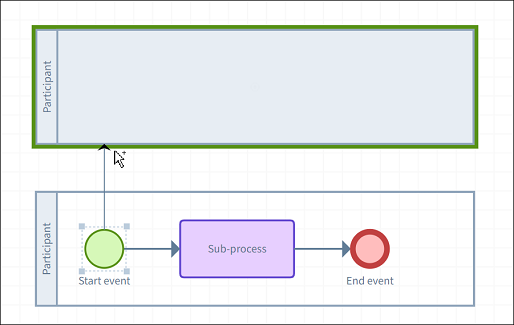 The sidebar of the Horizzon Design page containing the modeling canvas has changed. It now contains the menu items belonging to the model instead of the model package, which is the appropriate context for the diagram. The new context is also visible in the breadcrumb at the top of the page. 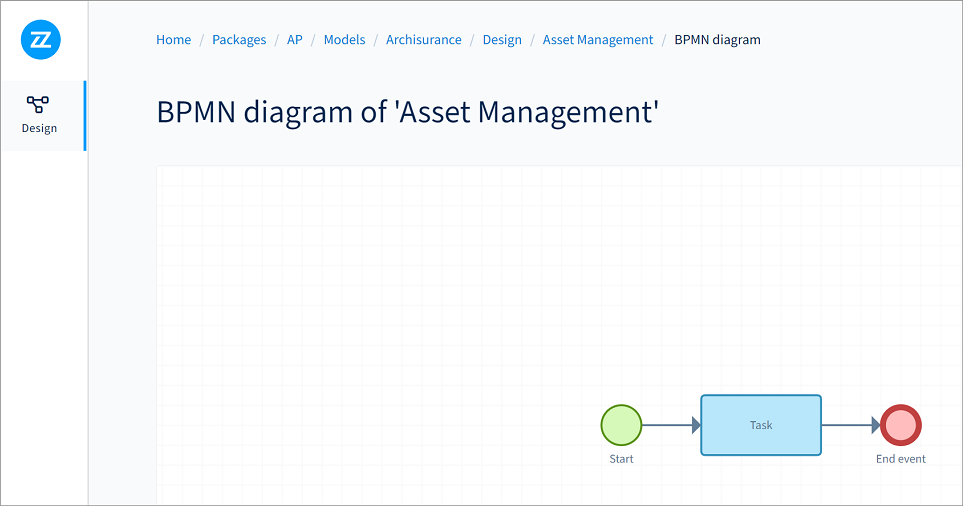 Few terminology changes have been made in the context of process modeling, they include:

One of the changes in the implementation of ArchiMate Specification version 2.3 is that Enterprise Studio no longer supports the specific role names for relations. The role names were never part of the standard and have now been completely removed.

If you use scripts that use specific role names, you will need to update them. The scripts will not fail, but return unintended or incorrect results and this might go unnoticed. You need to replace specific role names with general role names and optionally add a type filter for the target object. Depending on the contents of your script, other adaptations to the script may be needed to restore its original behavior.

The following script is used to find the processes that are triggered by the actor:

Following the example figure above, the result would be only the process. Now, if the general role name is used:

the result would be the process as well as the service. Since this is not the desired outcome, you need to make another adjustment to the script to get the correct result by adding a type filter "ArchiMate:BusinessProcess":

ArchiMate is a registered trademark of The Open Group.

BPMN is a trademark of Object Management Group, Inc. in the United States and/or other countries.

PowerPoint is a registered trademark of the Microsoft group of companies.