Different roles can be distinguished for users collaborating on model packages and projects in Enterprise Studio and working in Horizzon. A role determines the user's permissions in Horizzon and also which information is available to the user. Roles can be linked to individual users and to groups of users. A user or group can be assigned a single role, but also multiple roles. 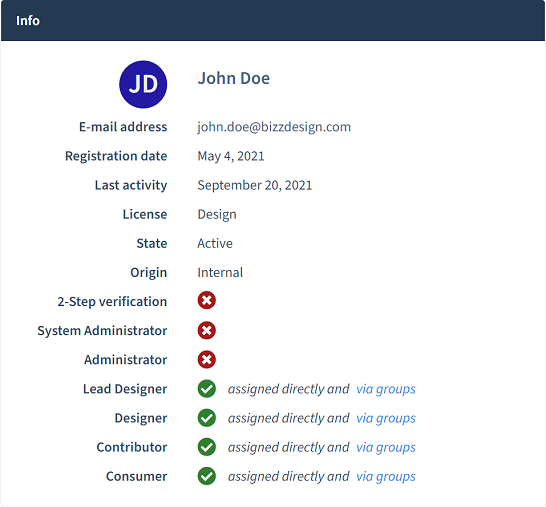 Only users with the Lead Designer or Designer role can contribute to model packages and projects they have been invited to in Enterprise Studio. If there is no limitation set on inviting people, any person can be invited. If the invitee is an existing user or group without a designer role, this user or group will automatically be assigned the Designer role. If the invited person is new and does not yet exist in the Horizzon administration, this person will also automatically be assigned the Designer role once he or she has registered with Horizzon.

The different user roles are related to the seats from your Enterprise Studio license. Different roles take different license seats. The number and type of seats in your license determine which roles can be assigned to users and to how many users. For more information, please refer to About Bizzdesign license seats and their availability.