Working with the Query tool

A query has two main parts:

A script creates a set of data with some structure. The type of data varies from objects to numbers and text. You, as a script writer, are in control what (type of) data you extract.

New scripts are written via the Query tool window. The Query tool can be opened via many context menus, and by clicking Advanced > Query tool (Ctrl+Q) in the ribbon.

When opening the Query tool via the ribbon or using the shortcut key combination, make sure the focus in the model browser is on a model or a component within the model. If the focus is on the model package or if there is no focus at all, you will not have full functionality in the Query tool.

The Query tool window has several parts: a text input field (for the scripts), an output field for (error) messages, and a part for selecting the output presentation type, and saving the query: 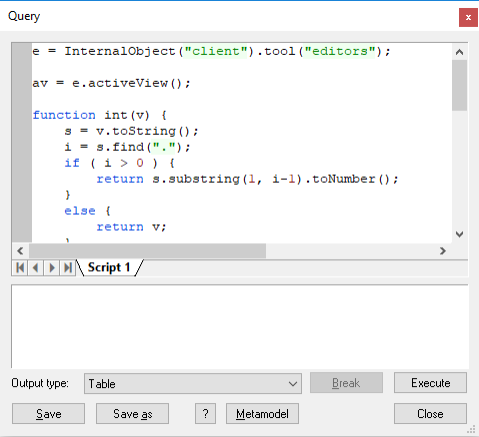 To enable you to locate and solve script errors, the Query tool offers debugging features like break points and step-by-step execution.

When a script is paused, the names and values of all variables in scope will be displayed in the message box, for you to examine. Script execution is resumed by pressing the Continue button (or F5).

Break points may be freely added or removed (using F9) when a script is paused. And instead of resuming execution fully, repeatedly pressing F6 while the script is paused will advance execution step-by-step, as if each line contains a break point. (Execution might take several tries to advance one line, because a line of code may describe multiple steps.)

When a script is paused it cannot be modified, and many other functions will be disabled. For certain presentation types (e.g. the browser) scripts are executed (possibly repeatedly) in response to certain user actions: If such a script contains a break point, it will pause during each execution and the Query dialog will receive the focus (as long as it has not been closed). The presentation of data by the output mechanism may be temporarily inconsistent due to the script being paused.