In a conceptual view, a definition of the entities can be included, and relations can have a cardinality. The cardinality of a relation describes the entity's involvement in the relation. The cardinality is expressed via a combination of participation (optionality) and multiplicity, and is expressed in terms of one-on-one, one-to-many, many-to-one or many-to-many.

In the example model above two entities are shown: Person and Organization. Between them is the relation works for going from Person to Organization. For the organization the role name employer is included. The following can be read by the cardinality: "Person works for zero or more Organizations" and "Organization employs one or more Persons".

In the example model above, an extra entity Employment had been included with respect to the conceptual example model. With this entity, the relation between Person and Organization is further elaborated. Not only the cardinality is more detailed, the properties (attributes) can also recorded in detail by indicating the optionality and key for each attribute. 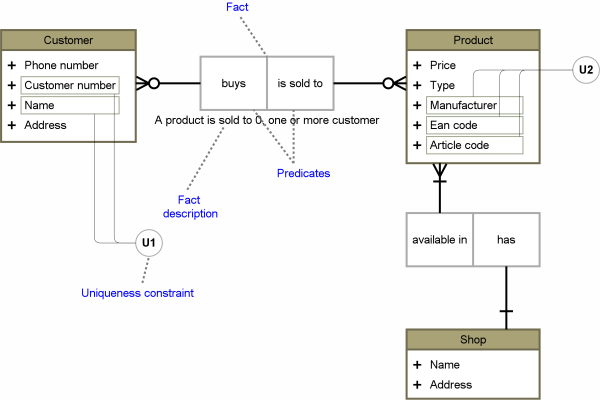